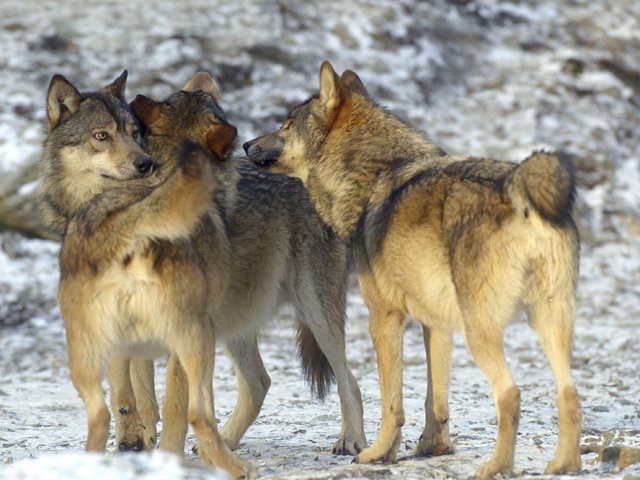 The wolf is now well-established in the French Alps.  Locally, in Savoie, two wolves were seen at the ski resort of Courchevel. They were spotted and photographed after dark by one of the ski resort employees whilst driving a piste machine. Earlier in the winter ski patrollers came across the remains of a deer surrounded by wolf foot prints.

The wolf (Canis lupus) lives in a wide variety of areas in the Northern hemisphere from wooded plains to the mountains.? The wolf is adapted for running and long journeys. It weighs around 35kg for a male and 25kg for the female. Wolves are social animals and live in family groups. Within this group is a dominant couple and this year’s off-spring and sometimes one or two from the year before. In France the packs range from two to six at the end of winter, rarely more than eight. The packs territory depends on the amount of potential prey.

In the French Alps a typical territory is in the order of 200 ? 400 km2. Young wolves typically leave the pack when they are between two and four years old. These wolves account for between 10% and 40% of the wolf population. At this stage they are vulnerable with little experience as they hunt alone in an unknown territory.

What the Wolf Preys On

The wolf eats a wide range of food including insects and fruit but typically it will prey on hoofed animals like deer and sheep. It will also feed on carrion. The wolf is very adaptable to its environment but to survive needs reliable food source year round. Wild animals typically chamois, deer and wild boar make up its principle prey and help to control these populations when they become too abundant. The wolf population self-regulates (according to certain observers) as the mortality rate of young wolves increases when there is not enough prey. However the wolf will try to take domestic animals mainly in the spring and autumn. In the French Alps farmers use ?patou? ( Pyrenean mountain dogs) to protect flocks and herds from predation.

History of the Wolf in France

At the end of the 18th century there were 10, 000 ? 20,000 wolves in France, present from the shores of the Atlantic to the high mountains of the Alps and Pyrenees. After a well-coordinated effort of extermination the wolf disappeared from France in the 1930’s. The last of them were found in the Dordogne, Charente, Vienne and the Haute Vienne. In the Alps it had disappeared thirty years earlier.

The Return of the Wolf

The first indications of the return of the wolf to France was in the Southern Alps in the late 1980’s. There was a confirmed sighting in the Mercantour (Alpes Maritime) in November, 1992. They had not been re-introduced but had come from the Abruzzes mountains of Italy.

The return has been helped by wolves being a protected species (the Berne Convention); an abundance of wild hoofed animals and previously cultivated ground being abandoned and becoming wooded again. In Europe the wolf has benefited from the increased population of roe deer and wild boar. Wolves are not afraid to cross urbanised areas and transport infrastructure like railways and motorways. A few yeas after this first sighting wolves were observed in many areas of the Alps and other mountainous areas including the Vosges, Jura, the Massif Central and the Pyrenees. There’s no reason why they will limit themselves to just mountainous areas and are quite capable of colonising most regions in France. The wolf only needs a good population of prey.

Encounters with man are relatively rare as they are unobtrusive, fearful and cover vast areas. In France the fear of wolves seems be instilled in the collective memory despite the only attacks on man being linked with rabies.? Protection dogs (“Patou” / Pyrenean Mountain Dogs) are being used by farmers to protect flocks from attacks by wolves. Studies have shown these dogs to be very effective if used properly. http://www.observatoireduloup.fr/

Cairns A cairn is a man-made pile (or stack) of stones. The word cairn comes … END_OF_DOCUMENT_TOKEN_TO_BE_REPLACED

Finally the time came to run my first via ferrata tour in the South of France! Saturday, 28th … END_OF_DOCUMENT_TOKEN_TO_BE_REPLACED