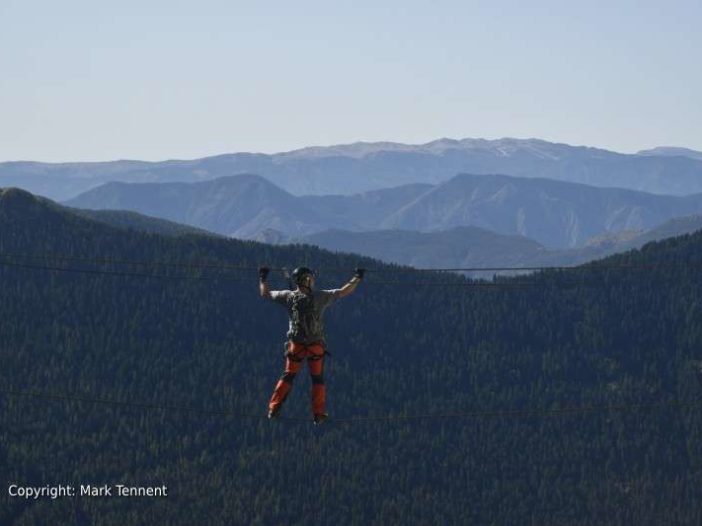 Finally the time came to run my first via ferrata tour in the South of France!

Saturday, 28th September saw me leaving my home near Albertville to head for the South of France.

I joined the motorway and headed first for Grenoble. Happily it was Saturday and so the typical early morning queues were absent. Looping around the by pass I soon picked up the road South. After a short section of motorway it was on to the twisty road through the Trieves and past the Mont d’Aiguille. Over the Col de la Croix Haute and the countryside changes. Soon I drove through Laragne and on to the another section of motorway near Sisteron.

I met Mark (who had been on two other via ferrata holidays with me) in the arrivals area of Nice airport. Soon we were in the car and out on to the motorway. Our destination for the night was Tende and the easiest way to get there saw us cross the Italian border before heading up the Roya valley.

We arrived at our hotel, an old Priory, for the night and checked in.

The following morning a 5 minute drive took us to the village of Tende itself. A quick stop to buy some sandwiches. We parked up by the railway station and walked up through the village passing the cemetery perched on the hillside. Soon we were at the start and looking at a Nepal bridge.

Across this we climbed a steep wall with increasing views over the valley in the clear autumn air. Soon we arrived at the first of the tyrolean traverses. I set off carefully as out Tandem Speed pulleys. Safely across we reached the chapel and a break for lunch. The next section, Les Heretiques, was sadly shut by an ?Arete Municipale? (local byelaw).

Back down in Tende we wandered through the amazing old streets.

Less than 10 minutes in the car saw us pull up in the village of La Brigue. The Tourist Office was open and I paid for two access passes for the via ferrata and got the key to the gate across the river.

A short steep approach through old terraces brought us to the foot of the route. A steep wall led to a even steeper or slightly impending wall that gave the arms a work out. The ground eased and a final short wall took us to the start of the 120m long Tyrolean.

Drive. We headed for the Col du Turini by a very winding road. There was no point in trying to rush it and it was best to ?take a chill pill? and enjoy the view. Next year’s Tour de France has this col on the itinerary – bonne courage!

We arrived at the St Sebastien Hotel near Roquebilliere. After the via ferrata and the journey it was great to chill out in the heated outdoor pool!

Lantosque. The via ferrata was ?shut? i.e. there was no one at the start collecting money and only a couple of chains barred access to the start. So we hopped over the chains and set off. The first section was very tame and we meandered down the gorge of the river. This section came to an end with a down climb and a Monkey bridge before crossing an enormous jammed boulder over the River Vesubie. The area weather the via ferrata local patrimoine accommodation restaurants / bars Tende

This was an outstanding day. We drove up from Roquebilliere to the Col de Colmiane. A short drive up a forestry road finishing as a track took us to a parking place. There was a hut that was clearly used as the “pay gate” but was un-manned.

A walk along the track and then a footpath took us on a descending path to the “Les Aiguillettes”. The highlight here was the large Nepal bridge. From here a short ziz-zag path through open pines brought us to the start of the next section; the Rochers de Miejou. In the first few metres a short traverse led to a short strenuous overhang. Above was steady.

At this point there were two options. Mark was not so keen on the harder one so we climbed the steep wall before traversing left above the lip of the cave. Here a ladder was climbed, facing out, with a squeeze to pass between the top and the cliff.

The following part was the “Arete des Calanques” on beautiful sculpted limestone. A real joy to climb. We then followed a short path to an exposed Monkey Bridge and I whipped round to photograph Mark crossing the bridge with the mountains of the Alpes Maritimes behind.

The culmination was the stunning Pilier du Soleil and an exit close to the summit of the Baus de la Frema at 2246m. A orientation table pointed out the surrounding summits.

Finally it was time to descend first on a good path and then threading our way down via various short cliffs, protected by cables. A brilliant day.

A steep drive up narrow roads brought us to the tiny village of Roubion. A quick visit to the Tourist Office to pay our dues and a cafe. The approach was on part of a GR through alleyways that took us out to the open hillside.

A path cut off towards the cliffs of the Balma Negra and we were soon at the base of the cliff gearing up. A short wall to a cave ensued before a steep climb in a fine position. From here the route traversed right on the lip of the huge cave. Onward along a steady traverse before a final Monkey Bridge.

As we were coming off a group of 30 odd French soldiers all kitted up for climbing started up the route. It was quite a sight seeing them dotted along the length of the route.

Our hotel for the night was in the village of Puget-Theniers and due to roads being closed we took a picturesque route via Valberg and Guillaumes and an impressive gorge.

We woke up to another day of blues skies. 5 minutes in the car brought us to the parking place. There was no one at the entry hut but I phoned the guides company that managed the via ferrata and a monster 450m tyrolean.

The Demoiselles du Castagnet, so named for the three pinnacles that formed the line of the route. The start up a steady wall brought us to a Nepal Bridge that gave access to a steep climb to the crest of the ridge.

A short down climb and a Monkey bridge in an exposed position. Another climb with the option of a more strenuous traverse took us to the tyrolean. This was a single cable and I was soon whizzing across the gap with only a slight brake necessary to arrive comfortably at the far end.

A final climb down saw in the woods and a pleasant footpath wending its way down to the valley.

We left the hotel after a 7 o’clock breakfast and headed down the Var and Nice airport.

Join me on this trip!

Cairns A cairn is a man-made pile (or stack) of stones. The word cairn comes … END_OF_DOCUMENT_TOKEN_TO_BE_REPLACED

Finally the time came to run my first via ferrata tour in the South of France! Saturday, 28th … END_OF_DOCUMENT_TOKEN_TO_BE_REPLACED