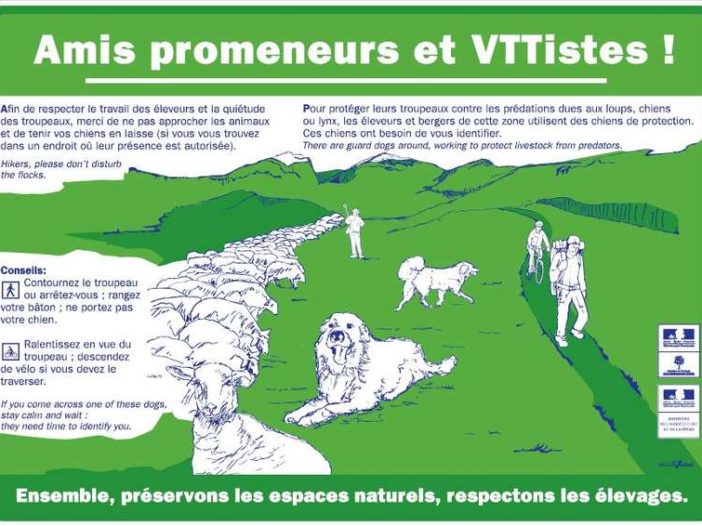 Walking in the French Alps or the Pyrenees, you will frequently come across herds of cows, sheep or goats. The sound of the bells tinkling is all part of the Alps. Maybe you will see a shepherd with them. The scene is all part of the timeless traditions in the mountains.

You are walking along a path enjoying being out in the mountains. Up ahead there’s a flock of sheep. If the terrain allows you to give the flock a wide berth.

As you approach you suddenly hear barking and a large dog running towards you.

How should you react? Stop!

The “Patou” thinks that you are a potential threat to the flock. It coming to find out. They may come quite close (5 to 10 metres) and bark furiously.

What are these dogs?

In the Alps they are known as ?Patou? however they are perhaps more commonly known as Pyrenean Mountain Dogs.

They are large, 65 – 85 cm at the shoulder, with a long white coat. They make good guard dogs as they are loyal to what they see as their ?family?. The dogs are brought up as puppies with the flocks and then come to see them as part of their family. They are very protective.

Why are these dogs there?

To protect flocks from predators. In particular the increasing population of wolves. In the Pyrenees they also protect from bears.

Farmers use guard dogs, patou. These dogs stay out on the mountains with their flocks day and night. Their use is largely due to the increasing population of wolves. There are regular wolf attacks reported in the local papers and farmers are understandably taking measures to protect their flocks and their livelihoods. One of the ways is through the use of patou. Wolves have spread over from Italy in particular. The wolf is a protected species under the Berne convention and to kill them needs an authorisation from the local pr?fet.

Cairns A cairn is a man-made pile (or stack) of stones. The word cairn comes … END_OF_DOCUMENT_TOKEN_TO_BE_REPLACED

Finally the time came to run my first via ferrata tour in the South of France! Saturday, 28th … END_OF_DOCUMENT_TOKEN_TO_BE_REPLACED