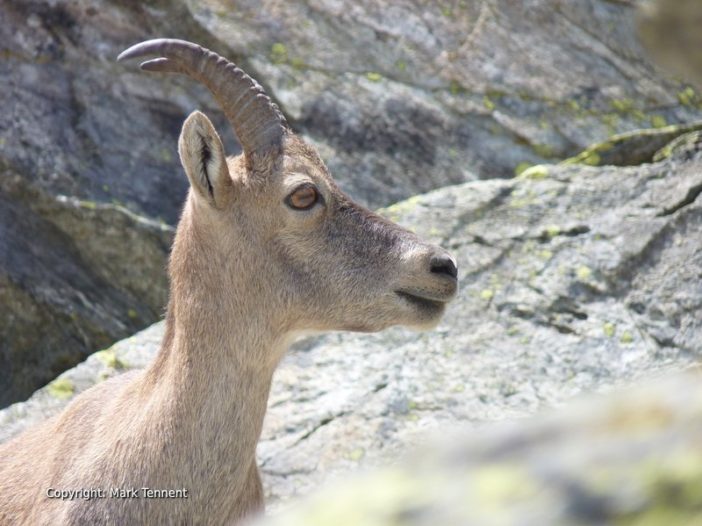 The ibex is the emblematic animal of the Alps. The ibex (or bouquetin in French) is an animal that likes rocky ground, not necessarily in the mountains and is well adapted to high altitudes. In the mountains it finds a last refuge from man.

It was on the edge of extinction at the end of the 19th century however the population is now stable. 100 000 years ago the ibex was present in all the rocky regions of Western Europe as fossils, bones and Neolithic paintings in numerous caves testify.

It was present throughout the Alpine Arc up until the beginning of the 15th century. Man’s increasing occupation and cultivation of the alpine valleys and the development of weapons with increased range increased its decline.

At the edge of extinction

At the start of the 19th century there was only just about 100 individuals in the French and Italian Alps. It had completely disappeared from the Swiss alps.

Saved by another king!

King Victor Emmanuel collected hunting trophies and noting the decline of the ibex he introduced a law ?Regie Patenti? of the 21st September 1821. This law outlawed the hunting of ibex on the royal hunting grounds of the Grand Paradiso, and subsquently the whole of the territory of the Maison de Savoie.

In 1922, the Royal Reserve of the Grand Paradiso created in 1856, became an Italian National Park. In France it was not until 1963 that the Vanoise National Park was created. The ibex became its emblem. At this time there were only about 50 ibex left in the area above Modane and Termignon (in the Maurienne valley).

After numerous studies regarding protection and re-introduction programmes around 40, 000 exist in the whole of the Alpine Arc. In the French Alps it is estimated there are between 6 000 and 8000 individuals. In France it has complete protection. (Bargy).

The future for the ibex?

Despite an increase in numbers the it is still watched over carefully. Certain illnesses regularly touch certain populations with occasionally high mortality rates. Most recently cases of brucellose have been found in ibex in the Bargy area of the Aravis mountains. Introduction programmes are still taking place, most recently in the Chartreuse.

The ibex belongs to the ?capra? family which includes all the capra species both wild and domestic; that is to say, goats. The classification distinguishes 6 goat species and 5 sub-species. Elsewhere in the world most ibex are considered to be threatened with extinction.

A year with the ibex

The end of the autumn is the time of the rut. The fur thickens and becomes darker. Up until now male and females have lived separately but now they come together for the duration of the rut.

The female ibex (etagne) is only receptive to the males for a few days a year whilst the male remains interested for several weeks. The male walks around with his tail up showing off the white fur on his white bottom.

An excited male follows a female step-for-step exuding a pungent aroma. His tongue moves in and out scenting the odours of the females. An indication of how receptive they are. Those females continuing to eat shows their indifference to being approached. Even if the hierarchy amongst males is well established ritual combat keeps the males busy. The dominant male has the privilege of mating with most of the females, a privelege that he guards jealously,waiting for the moment the females are receptive to his advances.

Winter awaiting for the spring

The ibex look for south facing cliffs and ridges where the snow is usually stripped bare by the wind. Lichen, moss and bushes and dry grass make up the majority of their food. Fat reserves built up during the summer allow him to get through the winter. A male in good health can lose up to 50% of his weight during the winter. It’s also the moment when the females are gestating.

The spring time and the arrival of the cabris

When the snow thaws the ibex descend to the valleys to make the most of the fresh grass. The animals are in herds clearly separate; males in one and females and young in another. Occasionally some young males accompany the females. They moult getting rid of their thick winter coats, rubbing themselves with their horns or on rocks. At the start of June the females find themselves alone and give birth to their off-spring. Pregnancy lasts around 5 months. Only 3 days old the young are already climbing on the rocks.

The summer, pastures, siestas and games

The ibex head higher in the mountains. Males of all ages make up one group and the females and young in another.

Reaching up to 1 metre in length and weighing more than 6 kg the males horns are impressive. The females aren’t quite so dramatic with horns reaching on average only 25cm with a weight of c. 200g. The number of ringlets on a males horns don’t directly indicate its age. The horn is composed of a case of keratine, like finger nails, hooves. If the bony base stops growing after 13 years the tips contine to grow for all of their life. The annual rings stop growing during the winter allowing one to age the animal.

Adult female: height: 70 ? 78cm; weight: 35 ? 50kg; lifespan: slight more than the male; characteristics: finer than the male, head resembling a domestic goat, no ringlets on the horns; horns much thinner and shorter than the male.

Eterlou or Eterle: either male or female in their 2nd year. About 2/3 the size of an adult.

Cairns A cairn is a man-made pile (or stack) of stones. The word cairn comes … END_OF_DOCUMENT_TOKEN_TO_BE_REPLACED

Finally the time came to run my first via ferrata tour in the South of France! Saturday, 28th … END_OF_DOCUMENT_TOKEN_TO_BE_REPLACED