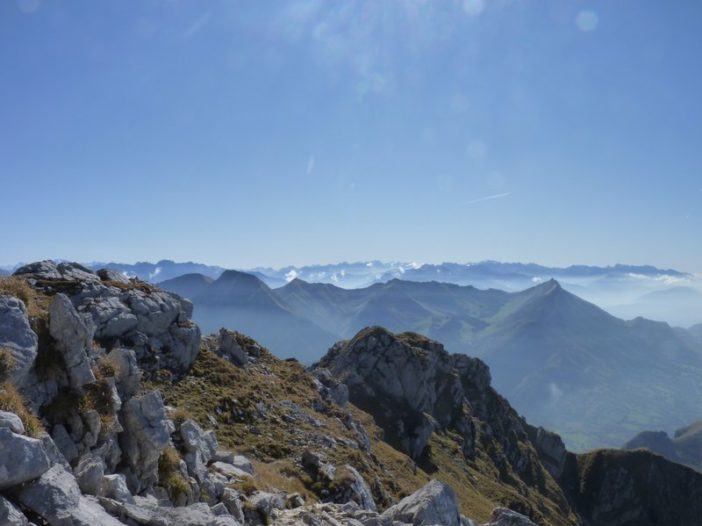 Mont Trelod (2181m) is in the heart of the Bauges with its steep, grass slopes and limestone ramparts.

Leaving from above the village of La Compote we gained height steadily through beech woods, the suns rays dappling the forest flow carpeted in rustling leaves. Breaking clear we were below the Dent des Portes and a well made path traversed below this impressive rock face. Alpine pastures of short-cropped grass greeted us and a path that traversed across to by the Chalets de Charbonnet. A sign now warned that the path we were about to take was for experienced alpine walkers only! We could see the summit and below it, steep slopes guarding the way.

The path was narrow and occasionally less sure but each moment it unfolded and we soon arrived below the cliffs guarding the summit cone. Two chamois appeared above us, a female and its young “cabri”. After posing for the camera they skipped away across the steep broken ground. A final traverse led us to the summit with a chance for some lunch with Alpine Choughs swooping around looking for a quick snack.

The views were tremendous from Aiguille du Tour, Mont Blanc all the way to the Ecrins in the south.

Cairns A cairn is a man-made pile (or stack) of stones. The word cairn comes … END_OF_DOCUMENT_TOKEN_TO_BE_REPLACED

Finally the time came to run my first via ferrata tour in the South of France! Saturday, 28th … END_OF_DOCUMENT_TOKEN_TO_BE_REPLACED