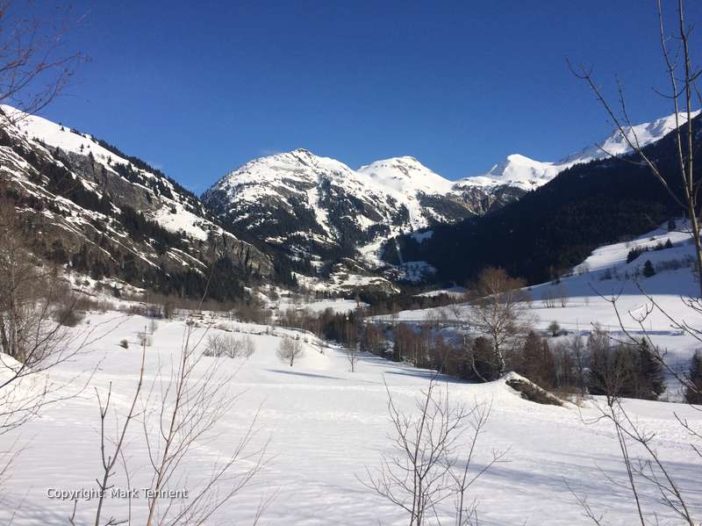 Termignon nestles in the Maurienne valley with the Vanoise mountain range on one side and the mountains forming the Italian frontier the other. Termignon is on the ancient trading route, the ?Route du Sel? that starts in the Tarentaise valley near Moutiers and crosses the Col de la Vanoise before dropping down into the Maurienne.

My intention today was to explore the valley of the Doron de Termignon in search of ibex (bouquetin in French). We were not to be disappointed.

Parking by the church we only had to walk a short distance before fastening our snowshoes. The snowshoes made no noise as we padded through the soft powder covering the ground as we headed off through open fields beneath the imposing slopes of the La Dent Parrach?e (3697m).

To our right the ground sloped gently down to the banks of the river. The Doron de Termignon starts near Entre Deux Eaux, high in the Vanoise, formed from the two torrents flowing out from the Vallon de la Leisse and the Vallon de la Rocheure.

From the confluence the Doron takes on a very different feel as it tumbles its way beneath dramatic cliffs in the glacier-carved gorge. This gorge is the nesting site for a pair of Bearded Vultures (or Lammergaier). The gorge ends near the Pont du Villard before following a more gentle course to its junction with the River Arc.
Chamois, Ibex, Vultures & Eagles

Soon I was reaching for my binoculars in my sac and scanning the broken cliffs that bounded the snow-covered pastures. I quickly spotted some chamois finding sparse, brown grass to maintain them through this harsh winter.

Suddenly movement in the sky caught my eye. The shape and size meant that it could only be a Bearded Vulture (or Lammergaier). It soared effortlessly above the cliffs against the blue winter sky. This would be one of many sightings during the day.

Next up on the fly past were two Golden Eagles spiralling up in the thermals given off by the exposed rocks. The eagles then proceeded to ?patrol? the cliffs no doubt looking for their next meal.

We continued to wend our way through the deserted countryside below the cliffs. We stopped for a hot drink and a snack in the ?sun-trap? formed by an old, tumbling chalet before continuing to parallel the cliffs. Another halt to scan the cliffs with binoculars was rewarded with the sight of numerous ibex. A female with a cabri (young ibex) grazed on the meagre offerings on the snow-free ledges. Adult male ibex grazed with their huge horns swaying with the movement.

As we climbed gently we looked back the way we came only to see a chamois crossing the field below us. An unusual, for me, perspective as normally they’ve always been above me on steep rocky terrain.

Our snowshoe walk culminated on a sunny knoll overlooking the start of the gorge. Above us two male ibex gave us a view of their huge, curved horns. Homeward now with the winter sun low in the sky casting faint shadows on the now crisp snow. A wonderful day snowshoeing in idyllic surroundings, ?off-the-beaten? trail.
About Termignon

Termignon is one of the largest communes in France and now amalgamated into the commune of Val Cenis. It counts six glaciers and sixty-three summits of over 3000m and almost a third of the Vanoise National Park. Termignon also lends its name to a cheese, the ?Bleu de Termignon?.

Cairns A cairn is a man-made pile (or stack) of stones. The word cairn comes … END_OF_DOCUMENT_TOKEN_TO_BE_REPLACED

Finally the time came to run my first via ferrata tour in the South of France! Saturday, 28th … END_OF_DOCUMENT_TOKEN_TO_BE_REPLACED