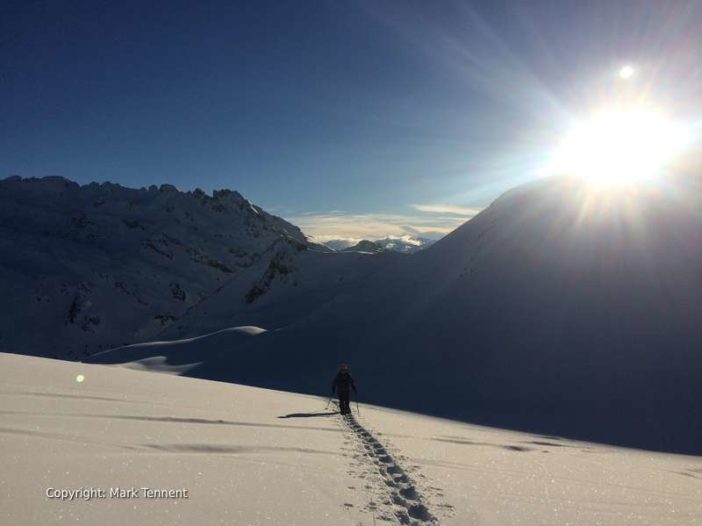 An amazing trip! We covered just over 50 km over 6 days. It doesn’t sound a lot until you start breaking trail in knee deep snow combined with days with up to 1000m of ascent.

After a very pleasant evening at the Hotel du Vivier at St Nicholas la Chapelle we took a short taxi ride to our starting point above Notre-Dame de Bellecombe. The forecast was good for the day and the low cloud promised to disperse. It soon did just that as we broke through the think cloud into glorious sunshine. A snow-covered track led upwards with clearings and snow-covered pine trees for company. Soon we were looking across to the Chaine des Aravis and down to the posh ski resort of Megeve. On up, zig-zagging through mature pine trees. We met the ski pistes below the Cret du Midi along with spectacular, 360 degree views of the mountains including Mont Blanc. Breath-taking stuff! The ridge roller-coasted along past the top of Ban Rouge (1983m). We stopped for lunch amongst sparse small pines feeling the warmth of the sun on our faces. Fox and hare tracks criss-crossed our route until we reached the Mont Vores (2097m).

The Mont Clocher with its white, tubular cross gave views across to tomorrow’s route and down to the village of Haute Luce and it’s baroque church tower. Soon we were descending past snow-covered chalets and then more steeply through woods before gaining gentler ground and chalets above Haute Luce and the end of our first day.

The next morning dawned clear and cold with a crisp crust crunching beneath our snowshoes as we headed in the direction of the Lac de la Girotte and La Commanderie. I was pleased to follow an upward ski-track rather than break trail as the path steepened. Soon we were in the sun again on this predominantly north-facing mountain side. We stopped for a snack in the sun-trap created by a old chalet, its wood darkened with the sun and age. Our path now diverged from the ski mountaineers as we followed the line of a forest track. An old avalanche had ?banked out? the track and we crossed this one at a time. A moment later we spotted a ?hard? of chamois. We stopped and watched one of them eating young shoots and branches of a tree by the side of the track. Now in the shade we moved on, silently brushing through deep, powder snow. We shared the work of breaking track. More chamois provided our lunch-time entertainment as they found thin pickings on a steep rocky hillside in the forest. Rounding a spur we stopped to check out the first part of our descent. Soon we were plunging effortlessly down through powder on a descending traverse to pick up the start of a track. We followed this until we came out in open ground interspersed with chalets deserted for the winter months. Soon we established ourselves on a broad spur that took us down to the hamlet of Les Curtillets. Shedding our snowshoes we followed a lovely footpath wending down past a waterfall and into the village of Beaufort and our hotel for the night.

The third day dawned with snow falling as we set off up a footpath heading in the direction of the Lac du Clou. Walking past a chalet a pair of dogs decided that we provided a great opportunity for an impromptu walk and they scampered along in front of us playing in the snow and snuffling around in the woods alongside. After two long days we were happy to keep today shorter and we used the time to practise avalanche transceiver searches, probing (with avalanche probes) and digging techniques with snow shovels. You can never practice enough. Soon we entered the village of Areches and our overnight stop.

Now the most challenging section of our traverse commenced. Leaving Areches we followed the the gorge coming down from the Lac de St Guerin and its dam. Some skiers passed us carrying large sacs after spending the night in a chalet near the lake. Our route went onwards, gently but continuously gaining height through the alpine pastures blanketed in a deep cover of snow. The Cormet d’Areches lay beyond us but first we had to pass the enchantingly named Lac des Fees (the lake of the fairies). Three ski-mountaineers caught us up, rythmically ?skinning? up. Hang-on a moment it’s Jacques, a friend from Beaufort! We stopped to chat and he introduced me to his daughter and her friend all looking fit and strong. A final steepening brought us to the Cormet d’Areches in increasingly poor visibility.

Passing by the signs marking the col (Cormet in the local patois) we passed behind a rocky out-cropping with a cross. The ground started to drop in front of us and there, half-buried in the snow, lay the Refuge de la Coire. In the winter the refuge had no guardian but part of the hut was open for people to use. Shedding boots and snowshoes we put on the provided hut shoes. We laid claim to four bed spaces in the dormitories on the first floor with big windows looking down the valley. The hut ended up being chock full not entirely unsurprising as it was a Saturday in the February half-term period. Whilst crowded the atmosphere was great, we played cards and were invited to taste a cheese fondue prepared by another group.

The forecast for the ?key? section of our route was for wall-to-wall sunshine but with rising temperatures. So I was keen to complete the major part of this section before the snow softened too much. This was both to make the going easier but also to lessen the risk of avalanches prompted by the rise in temperature. We left at 7.30 a.m. in the cold dawn light. Mont Pourri in the Vanoise poked its shapely summit above a bank of cloud. Some spindrift created a banner flying from the summit crest of the Cret du Rey as we gained height up a broad re-entrant. Initially we made use of an uphill ski track to avoid breaking trail ourselves until it headed off leftwards. We then worked our way up rightwards towards the summit of the Cret du Boeuf (2384m). Dawn broke with the sun’s warming rays softening the shapes around us. We reached the crest, careful of cornices overhanging the Grande Combe and the valley de la Grande Maison. A short descent skirting a wind-blown wave of snow brought us to our first objective the Col de la Grande Combe. A quick peek to check out the best line saw us taking a descending traverse back into the shadows. The Col des Genisses was half in and half out of the sunshine in front of us and when we reached it a new panorama revealed itself. Spread out before us the summits of the Vanoise and further in the distance the high summits of the Ecrins, the Meije and the Barre des Ecrins. Magic!

The sun was already softening the surface of the snow as we skirted below an unnamed top and reached the Col des Tufs Blancs. Up until now we had seen no one. Now we met some people coming in the opposite direction and the Refuge du Nant du Beurre; our destination for the night. I picked a line down from the col and on to flatter ground looking all the time for the safest line to reach the next col which was protected by steeper ground with large ?pillows? of snow. Decision made and we headed right before zig-zagging upwards spaced out to avoid over-loading the slope. A final effort and we were on the col looking southwards to the Lauziere and the Col de la Madeleine.

Relaxed now with the key section behind us we stopped for an extended lunch basking in the sunshine and drinking in the views all around us. Close by the summit of the Grand Cretet beckoned so we set off along the ridge. Several ski mountaineers kept us company on the top. Below us the refuge Nant du Beurre beckoned, you could almost taste the beer! So we plunged down the slopes to arriving eventually on the sunny south-facing terrace. Beers in hand we chilled out in the bright alpine sunshine watching ski mountaineers on the slopes of the Pointe du Dzonfie. Later the setting suns rays bathed the mountains in the pink of the alpenglow as it dipped below the ridge of the Massif de la Lauziere. An unforgettable day.

The morning dawned clear but with a bank of cloud heralding the forecast change in the weather. For us there was no hurry and we had a relaxed breakfast at 8.00 a.m. As we set off down the snow crunched beneath our snowshoes. Our route meandered down to join the cross-country ski trails that threaded their way along the contours between stands of birch. We continued our descent own passing chalets. A final steepening and we reached ?the end of the road? our Traverse of the Beaufortain and and the village of Grand Naves.

Cairns A cairn is a man-made pile (or stack) of stones. The word cairn comes … END_OF_DOCUMENT_TOKEN_TO_BE_REPLACED

Finally the time came to run my first via ferrata tour in the South of France! Saturday, 28th … END_OF_DOCUMENT_TOKEN_TO_BE_REPLACED