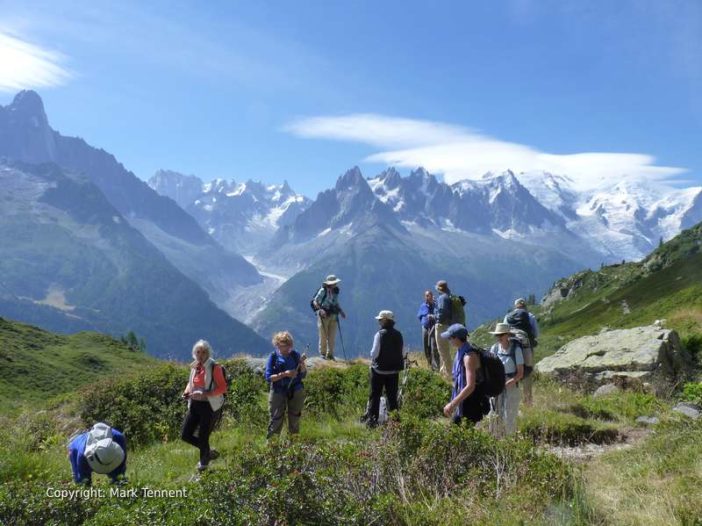 The Sustainability of the Tour du Mont Blanc in Question

Look behind any large rock or amongst the trees close to the path and you will come across human waste and toilet paper. It’s hideous.

The path is severely eroded. Given the many years that the Tour du Mont Blanc has existed you can expect erosion however walkers need to be educated.

Hikers on the Tour du Mont Blanc need to be educated to avoid taking short-cuts especially where paths zig-zag. These short-cuts create more channels for surface run-off that is quickly eroded after heavy rain. The fragile soil and plant life are unlikely to ever recover.

Mountain bikes, or as they are known in France VTT (Velo Tout Terrain) exacerbate and accelerate the rate of erosion. My observations show that they frequently avoid the drainage channels and rocks designed to take water off the path. By doing so they create a new channel for the water that simply by-passes the channel making it redundant; unable to do its job.

Watching a group descend from the Col du Grand Ferret they clearly had no regard for the erosion they were causing and spreading it across the mountain. I feed that mountain bikers are similar to downhill skiers; not real mountain lovers but those in search of an adrenaline buzz in a man-made environment.

Etiquette in the Mountains

In the mountains the etiquette has always been that those going up have priority over those going down. It’s common sense and courtesy really as it’s harder work going up hill. Whilst guiding an American lady this summer finding it hard going I was setting a slow pace for her. An American coming down the path indicated that I should move out of his way. I just stood there and politely reminded him of this mountain etiquette to which he said I was the first a***hole he’d met on the Tour. Charming.

I can see the attraction of a drone and the amazing footage that one can obtain. However for those in the vicinity the buzzing like a demented bee is very intrusive. During a Tour du Mont Blanc this summer I was sitting with the group at the Col du Grand Ferret when a group of mountain bikers arrived. One of their number then got out a drone and launched it.

Putting in place dry toilets in locations where, currently, there are no toilets could help. There needs to be a move to construct bio matter type toilets in places where people tend to congregate e.g. the Col du Bonhomme (where there’s already a wooden shelter); Col de la Seigne or just below adjacent to the Casmatte; Col du Grand Ferret; Col du Tricot.

The use of zip-lock bags for toilet paper and / or human waste should be encouraged.

A levy for companies with groups on the TMB could be used for putting money back in to provide additional facilities and provide money to pay for ?wardens?.

Despite its world renown the Mont Blanc massif has no special protection. National Park status would bring with it a level of regulation backed up by national park wardens. Yes, the TMB passes through Italy and Switzerland as well however even if the other countries did not agree, it would create an upwards pressure.

Finally arrived on the Lofoten Islands and enjoyin

Heading for the Lofoten islands in Norway.

Lovely lunch with the inclusion of wild mountain p

Another beautiful day in the French Alps amongst t

Summit of the Grand d’Arc in the Lauziere.

Just back from a ski tour above Les Menuires Chez