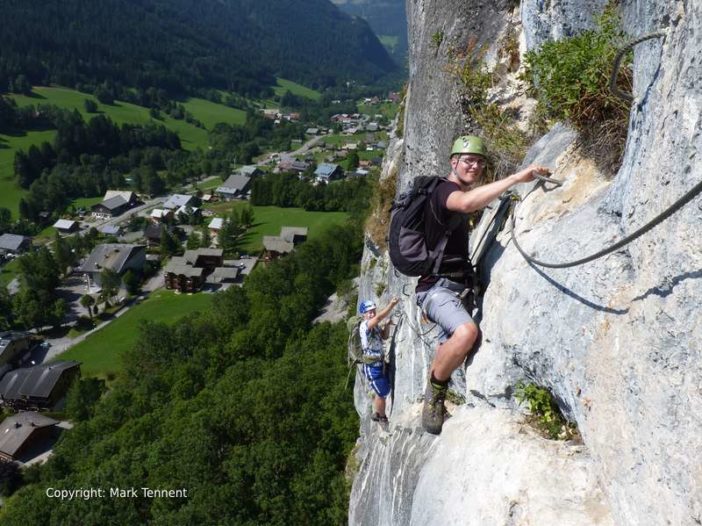 In France via ferrata are graded using the well-established names used for alpine mountaineering. It is this grade that you will encounter on the information panels and in the local tourist offices.

So the grades (?cotations?) in use in France, in rising order of difficulty, are:

These grades may be modified with a ?+? or a ?-? to indicate that they are at the top or bottom end of the grade respectively.

As with all grading systems there is a large degree of subjectivity. What one person may find D another may find TD and vice versa. However for long established routes the grades will be an overall consensus that will tend to be reasonably accurate. It gives some food for debate with friends!

You should note that there is no correlation between a via ferrata graded at TD (Tr?s Difficile) and an alpine mountaineering route of the same grade!

It’s also worth bearing in mind that some via ferrata are located in valleys whilst some are located high in the mountains.

Weather conditions can change rapidly and old snow fields (neve) may be encountered in early summer.

Via Ferrata for Children

Some via ferrata are especially adapted for children by the making sure that the bars, cables and other equipment are closer together for children and small adults. This may be indicated in descriptions.

The Cicerone guide, produced in the UK, uses a ?proprietary? grading system that makes it hard to relate to how via ferrata are graded in France.

Check out my via ferrata holidays and guiding services

Cairns A cairn is a man-made pile (or stack) of stones. The word cairn comes … END_OF_DOCUMENT_TOKEN_TO_BE_REPLACED

Finally the time came to run my first via ferrata tour in the South of France! Saturday, 28th … END_OF_DOCUMENT_TOKEN_TO_BE_REPLACED