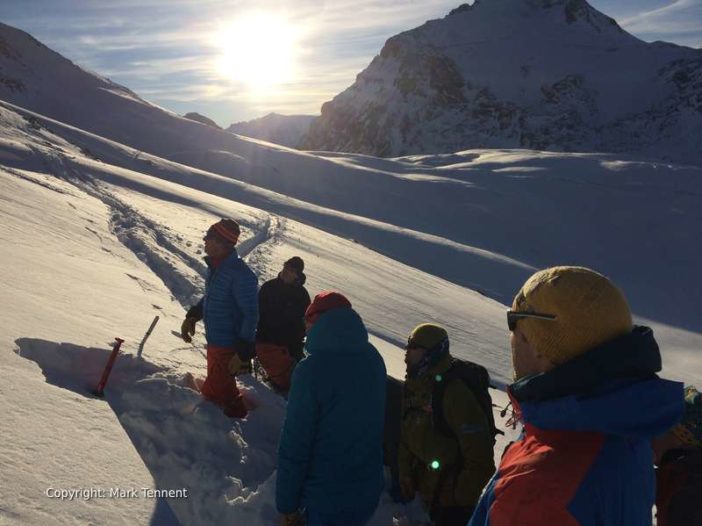 On the 27th of November I organised a day at Tignes in the French Alps with the avalanche expert Alain Duclos. He is also an IFMGA mountain guide and is involved in training France’s guides at ENSA (the French National Skiing & Mountaineering School) and is an expert witness at the Appeal Court in Chambery.

I’m a great believer in the phrase ?you never stop learning?. A group of eight of us met Alain at the ski resort of Tignes on a very cold but clear day. After sorting out a one-way ticket on the funiculaire (mountain railway) Alain gave us a copy of a new leaflet on avalanches that he and his team with Avalanche-Data.org have produced.

The leaflet highlights 6 criteria to take into account. These being:

Alain and the team then propose 4 awareness levels.

Relaxed: when there are no danger signs, a normal level of awareness, avalanches are unlikely in this area.

Concerned: sign(s) of danger are identified, avoid the danger, avalanches may take place in the area.

After a moment queuing we took the funiculaire to reach a height of 3000m. From here we headed off on skis into the wilds. Soon we stopped and Alain asked us to get out our probes and shovels. We excavated a huge trench digging down to ground level; here about 1.5m. A quick check of the hardness levels of the snow by running a snow saw down from the top identified some layers. Next a small column of snow was isolated from the surrounding snow. Alain used the blade of his shovel and started to tap with his hand with increasing force. A crack appeared about 20cm down and the block of snow slid off. Harder taps resulted in a crack appearing close to ground level. Next, starting at the level of the crack at ground level Alain started to saw along the remainder of the 2.5m long isolated block. After going about 50cm the whole block settled and slid forward. The crack had propagated along the weak layer and released the block of snow. This clearly demonstrated the slab avalanche release mechanism.

We then skied on to find another spot to play, as Alain calls it, ?Stability games?. We took a break for a picnic lunch in the sun before putting ?skins? on our skis to climb up the other side of the deserted valley. More slopes were examined before it was time to head back to Tignes. We enjoyed skiiing down with some good powder to enjoy between sections where the snow was last accommodating.

A great day with many ?nuggets? of information to take away.

Cairns A cairn is a man-made pile (or stack) of stones. The word cairn comes … END_OF_DOCUMENT_TOKEN_TO_BE_REPLACED

Finally the time came to run my first via ferrata tour in the South of France! Saturday, 28th … END_OF_DOCUMENT_TOKEN_TO_BE_REPLACED