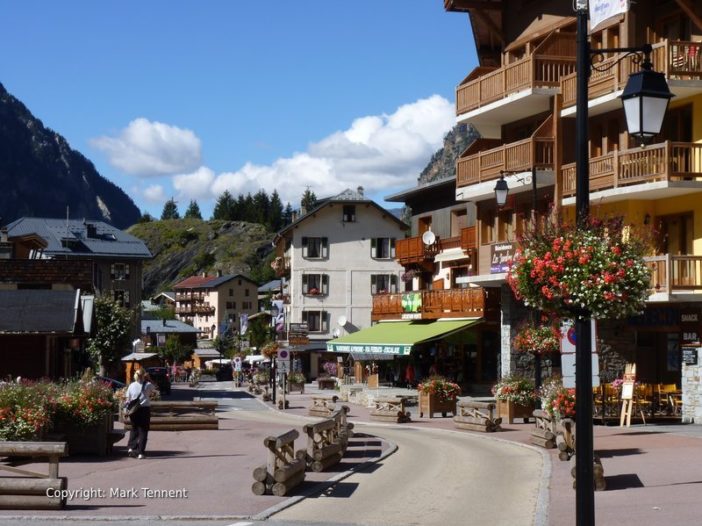 The Vanoise is not a name that immediately springs to mind if you live the other side of the Atlantic. The Tour du Mont Blanc and the Haute Route are undoubtedly the hiking / trekking routes that dominate the brochures. This means these two routes and especially the Tour du Mont Blanc (or TMB) have become very crowded during the ?season?.

How would the Tour of the Vanoise compare for a small group of experienced American hikers that I guided on the tour?

Pralognan-la-Vanoise itself was a refreshing change from the metropolitan, hustle, bustle of Chamonix. Pralognan is literally at the end of the road.

They remarked on how few English voices they heard walking through the centre of the village on the single shopping street. The shops were not dominated by big brand names endeavouring to out-do each other. The other visitors were almost exclusively French and there were no big parties of tourists with eyes glued to cameras or with ?selfie? sticks protruding in front of them.

Pralognan-la-Vanoise is an authentic French village experience. Yes, there’s some downhill skiing but first and foremost it’s a village.

You will encounter few large, organised groups on the Tour of the Vanoise. This was a dramatic contrast with the ?bucket list?, Tour du Mont Blanc where you’re constantly bumping into other groups. The paths remain in good condition, largely free from the problems of erosion caused by large volumes of trekkers.

There are no mountain bikes to share the trail with as they are banned* in the Vanoise National Park. The scenery is simply stunning.

There’s something special about setting off up one valley and then, six days later, returning to the village from another having hardly touched a surfaced road; a refreshing and authentic experience.

There are no options to take a bus to skip a section or to take a cable car or two. Baggage transfer is not an option as there are no road access points along the way. You carry what you need for the entire trip. You carry the essentials and leave behind the trappings of modern life and are happier for it.

Staying high in the mountains

Leaving Pralognan-la-Vanoise at 1400m you don’t drop below this altitude for the whole week. There’s no return to the valley floor. Indeed the lowest point during the trek is 1800m and you spend much of your time above 2000m. You meet like-minded individuals who share the passion for the real mountains uncluttered with man’s ill-considered ?developments?.

To hike the Tour of the Vanoise you will need to be prepared to stay in mountain refuges (or huts) all with their own character. There’s no possibility of staying in hotels. It’s communal living, sleeping in dormitory style rooms.

The refuges are varied. There are the modern refuges like the Col de la Vanoise, the Refuge de l’Arpont and Peclet-Polset.

Then there’s the traditional Refuge de la Dent Parrachee. Here you rub shoulders with mountaineers heading for the summits and glaciers of the Vanoise.

Creature comforts at La Dent Parrachee are limited but the atmosphere is second to none thanks to the guardian, Franck. Franck presides over the refuge with a humour and a ?joie de vivre? that is infectious.

Finally, there’s the lovely Refuge de l’Aiguille Doran [sadly now closed], set on a grassy shelf above the valley of the Maurienne surrounded by pines and old alpine chalets. The Aiguille Doran is homely and the guardian, Fabienne, is a most wonderful cook and host.

Cairns A cairn is a man-made pile (or stack) of stones. The word cairn comes … END_OF_DOCUMENT_TOKEN_TO_BE_REPLACED

Finally the time came to run my first via ferrata tour in the South of France! Saturday, 28th … END_OF_DOCUMENT_TOKEN_TO_BE_REPLACED