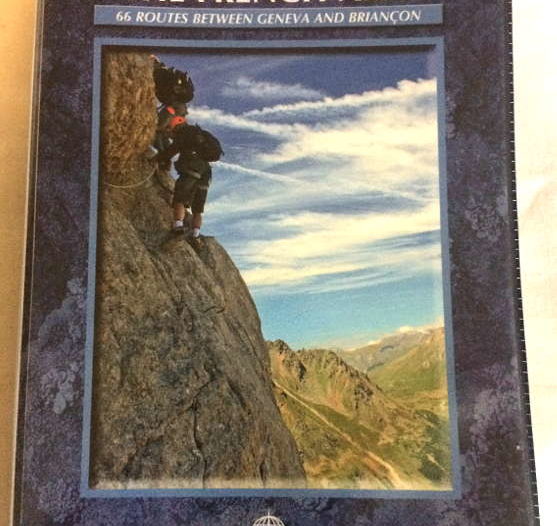 A client showed me Richard Miller’s Cicerone guide book to via ferrata in the French Alps when he came on my Via Ferrata in the South of France trip.

As a professional climbing instructor in France I have specialised in guiding via ferrata in the French Alps for many years. Prior to this I worked as a Mountaineering Instructor in Glen Coe, Scotland. I also trained and assessed potential instructors.

So it was with some interest that I looked at the Cicerone guide book. Some of the advice at the start of the guide book gave me some concerns. In my time guiding via ferrata I come across dangerous practice on quite a regular basis.

Richard Miller whilst clearly enjoying via ferrata on a personal basis is perhaps not the best person to give advice on technique and equipment. His bio’ makes no mention of qualifications in the mountaineering field.

Richard has decided to create his own grading systeme for the via ferrata in the guidebook. The guide covers just 66 routes and other routes that users of this guide may encounter will use the well-established system already in place. Why change a very well established system?

Yes, the system currently used in France is not perfect but then what grading system is? The current system of grading is described in my article, “How are via ferrata graded in France“.

For people using the guide all the information “on the ground” i.e. information panels will bear no resemblance to his system.

Richard talks about the various items of equipment typically used on via ferrata. Some of the information is dubious.

Should people choose to buy equipment in France the language barrier may be an issue.

Remember: via ferrata are potentially dangerous, and therefore all equipment used should confirm to the relevant safety standards. Don’t buy off Ebay!

If any doubt what to get and how to use it, consult with the staff at a climbing shop!

Shops in the UK are not always staffed by experienced people; still less those with substantial via ferrata experience. Their advice may be suspect.

Full body harnesses are as rare as hen’s teeth except for ones produced for young children e.g. the Petzl Ouisti.

Any doubts engage a qualified mountain guide or climbing instructor – this is Richard’s best advice!

“Friction plates” these have been superseded by the “rip-out” style shock absorbing system. The French equipment manufacturer Petzl that specialises in mountaineering and industrial applications has NO friction plate systems in its product range.

Construct a via ferrata lanyard by yourself .. not recommended!

I would say that having seen “home-made” or improvised via ferrata lanyards that it is potentially lethal! Here’s a great example from YouTube!

There’s no need to use a screwgate karabiner as both lanyards should still be attached. When not in use and the screwgate is hanging down it will almost certainly screw itself up! So, when you come to use it, perhaps with arms tiring you are suddenly having to fiddle with the gate.

I use a screwgate krab attached to the pre-sewn loop above the shock absorber (not on all via ferrata lanyards) along with a quick draw and at the other end a plain, bent gate krab that is very easy to clip into rungs or the cable.

This is misleading. Should you fall you are going to fall until the krabs on the lanyard reach the last anchor point. At this point depending on the force of the fall the lanyard will then rip (or slip if it’s a plate) and allow you to fall several metres further. Fall’s are to be avoided at all costs!

These are not what mountaineers refer to as “pitons”. A piton is a metal rock anchor that is hammered into a crack in a rock face. The “Pigs Tails” (Queue de Cochon in French) are placed by drilling into the rock and then using a special resin to keep them in place.

When I notice a party catching up I advise saying you’ll let them through when you are in a good spot. By doing this the faster group knows that they are going to get by and you’ll feel much less stressed. Always stay clipped in! I gather my krabs together on the cable and flatten against the cliff to make it easy for them to clip past.

Whilst in this guide the tyroleans are optional people should be aware that on some via ferrata these are not ?optional?! You will need the right equipment (sometimes available to rent) and know how to use it.

Tyroleans on via ferrata come in two forms.

The first has a double cable . Here put the pulley on to one (which one is typically indicated). Place a steel karabiner or maillon rapide on the second and clip one of your lanyards into the karabiner or maillon. An aluminium krab will have a groove worn in it if used directly on the cable.

Single cable tyroleans require a bit more thought and the right shape of karabiner. Place the pulley on the cable. Clip one of the karabiners (from one of the lanyards) over the cable and position it so it “sits” on top of the pulley. If positioned correctly it doesn’t touch the cable and yet should the attachment to the pulley fail for any reason this karabiner will leave you still attached to the cable.

In both cases you should only have a very short distance between your harness and the pulley. Normally it’s best to connect a large screwgate between the pulley and your belay loop on the harness. You need to be able to put both of your hands on the cable. This is both for potential braking but also should you not arrive by gravity at the far end you will need to turn around and pull yourself hand-over-hand along the cable.

Different tyroleans have been set up to be used with particular models of pulleys. The type of pulley required is indicated at the start of the via ferrata or mentioned in the guidebook.

Petzl currently produce two double pulleys. The Petzl Tandem Speed – a silver / grey colour and the Petzl XX. The second is only for use on ropes! You will probably still find that some via ferrata talk of the Petzl Jaune (yellow). This is no longer in production. The issue with using the Speed is that it has steel ball bearings and runs much faster than the Jaune. You will need to brake much more to avoid crashing into the end of the tyrolean. Use thick leather work gloves. In some cases you can hire a Jaune but for how much longer? The tyroleans will need to be re-adjusted by lowering the starting point or raising the arrival.

To slow down on a tyrolean place the flat of your hand (wearing thick leather gloves) on the cable behind the pulley. Never put your hand in front and avoid putting it on tope of the pulley.

Children should always be roped up in addition to the via ferrata lanyard. There are some via ferrata specifically designed for young children. These via ferrata are constructed with the rungs

A word of warning – English translations are frequently a summary of the French one and are sometimes poorly translated.

Further potentially misleading information is given about via ferrata during spring or early summer. Many via ferrata are officially closed by “Arrêté Municipale” (local bye-law) when snow is on the ground.

“Give it a solid whack with your boot or fist!”

In my years of rock climbing I would initially just giving it a tap with the heel of hand – a “hollow” sound indicates it’s not solid. Starting off by giving it a solid whack may dislodge it straight away potentially falling on you, a companion or others on the route.

Richard is incorrect to say that you will need to pay for mountain rescue. Mountain rescue in France is *free! Medical cover is not and you should insure yourself for doctor’s or hospital bills.

*During the winter months within what is defined as the “Domaine skiable” rescue is paid for.

Cairns A cairn is a man-made pile (or stack) of stones. The word cairn comes … END_OF_DOCUMENT_TOKEN_TO_BE_REPLACED

Finally the time came to run my first via ferrata tour in the South of France! Saturday, 28th … END_OF_DOCUMENT_TOKEN_TO_BE_REPLACED