Tour of the Queyras

Our Tour of the Queyras starts at the village of Chateau Ville-Vieille (1377m) in the Guil valley. A gentle first day takes us to St Veran (2100m), the highest inhabited village in France. Chalets of wood with stone tiled roofs. Sun dials adorn the walls. ?You will have the chance to savour Italy twice. You can explore the picturesque village of Chianale and then later you will discover the Ciabot del Pra in the Val Pellice and the Refuge Jervis.

Where are the Queyras?

The Queyras really are a ?hidden gem? as many people have never heard of them. The Queyras lies south-east of the town of Briancon nestled between the Durance valley and the Italian border where the peak of Monte Viso dominates the skyline. To the west is the Ecrins National Park with several peaks over 4000m.

The Queyras in the past was an area difficult to access. Its remoteness and relative inaccessibility has helped to preserve it. It has remained unscathed by mass tourism.

Coming from the North there is the Col d’Izoard, made famous by the Tour de France, and shut in winter at 2360m. The main access is from the west and the town of Guillestre. From Guillestre you can reach the villages of Ceillac and and the Guil valley with villages such as Chateau Queyras and Molines-en-Queyras. Chateau Queyras is named after the medieval castle that protected the area from people coming from Provence.

The Queyras become a regional park in 1977 to preserve its natural environment and local heritage. Ancient irrigation channels traverse the fields give testimony to man’s endeavours to provide a living from the land. Hayfields are still cultivated up to 2000m. Our Tour of the Queyras will see us walking through forests dominated by larch trees. Larch make up 60% of the forests in the Queyras. ?Wildlife abounds in the Queyras including the ?mouflon?, originally from the islands of the Mediterranean. You may also expect to see ibex and chamois.

Cairns A cairn is a man-made pile (or stack) of stones. The word cairn comes … END_OF_DOCUMENT_TOKEN_TO_BE_REPLACED 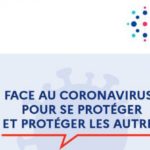 It's now Day 6 of confinement in France. The measures put in place to restrict movement of people … END_OF_DOCUMENT_TOKEN_TO_BE_REPLACED

Snowshoe walking in the French Alps.

Hi from Mark in the French Alps

Walking on the Tour du Mont Blanc in the Italian V